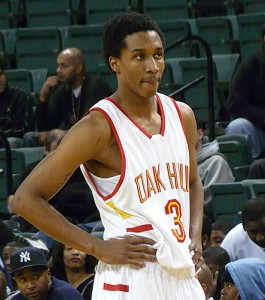 I get this question all of the time and honestly its a difficult question. Personally I think and know that anything is possible these days depending on talent and who you know. In the case of Brandon Jennings a player that I recently discovered is doing what many high school seniors would love to do after graduating from high school and that is straight pro. The NBA in recent years has made it difficult for high school players to come out directly to the NBA, however there is no restriction for the overseas market.

Brandon Jennings may be only 19 years old, but he has the mindset and playing skills of a potential Hall of Famer. Jennings a 6-2, 165 pound All American point guard that played his junior and senior years at Oak Hill Academy, located in Mouth of Wilson, Virginia. Oak Hill Academy has produced many of the NBA’s greatest players such as Carmelo Anthony, Rod Strickland, Jerry Stackhouse and many more players that made a name for themselves on the pro level. Jennings a native of Los Angeles, California is one of the greatest point guards in the game since Allen Iverson made his debut with the Philadelphia 76ers.

Jennings is known for his flashy style of play that includes excellent passing skills and the ability to score on many defenses. In high school Jennings averaged 38.7 points, 11.5 assists, 8.1 rebounds and 13.0 steals per game in his senior year at Oak Hill Academy. Jennings has many awards under his belt such as the Naismith National High School Player of the Year, EA Sports Player of the Year and the Gatorade Player of the Year. Jennings had narrowed his college choices down to two schools, The University of Southern California and Arizona. However Jennings opted out of going to college he decided to become the first player out of high school to jump to play professional basketball overseas.

He is currently playing in Italy for Lottomatica Roma in the Italian Basketball League. Jennings decided that he will play international basketball for a year and then enter the NBA Draft the follwing year. Jennings has received endorsement deals from major companies such as Under Armour Jenning is noted to be in the top 10 players to be selected at the 2009 NBA Draft being held June 25, 2009 at New York’s world reknown area, Madison Square Garden.  So for videos and more on Brandon Jennings look below