Section: SPORTS 2 POINTS AN OCEAN AWAY

Illustration: Photo, Sylita Thomas poses near her team’s arena in a Finland snowstorm., By AP 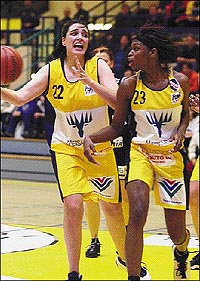 AANEKOSKI, Finland – The sense of isolation can get pretty intense in the winter here.

It is cold and dark most of the time, and being in a small town, there is not a lot to do.

I guess I have come down with a mild case of homesickness. I miss the United States, the energy, intensity and attitude.

I miss the little things that you tend to take for granted in America: grocery stores that stay open late, outlet malls and NBA and college basketball games on television each night. I also miss not having an automobile.

Don’t get me wrong, I like it here, and the players and coaches have been great to me.

The team’s coach, Mervi Nurmi, wants me to have a 10-year career here. I don’t know about that, but my teammates, coaches and fans have gone out of their way to make me feel at home.

The Finnish are a laid-back people, easy to he around, reserve but warm. They mind their own business. Theirs is a live-and-let-live culture. You can walk the streets alone at night and not he in fear. You rarely hear about any serious criminal activity, such as murders, rapes and robberies, as you do every five minutes in the United States.

Even when I was at Georgetown, you were urged to walk in groups between M Street and campus at night.

The Finnish celebrate their Independence Day on Dec. 6. This is a festive occasion. Everyone puts candles in their windows and has a good time. There was no snow on the ground Dee. 6, which was unusual.

There has been only some rain and wind in these parts, not unlike the typical winter season in Washington, so I’m fine with the weather. This time of the year is depressing to many Finns because it is dark much of the time. Let me tell you, the darkness does get to be too much. You get only a couple of hours of daylight a day, a milky-type sky. I haven’t seen the sun since October.

But I have adapted to an extent. The time is passing more quickly for me this year than last. I had my bags packed by November in my first year.

To stay busy, I have started to do volunteer work at the library, the only one in town and my lifeline to the outside world. I figured because I spend so much time at the library on the Internet, I might as well do something productive.

I have been placed in charge of updating this popular Web site for Finnish musicians. I enjoy the work because one of my areas of study in college was Web design and site building, and immersing myself in this activity possibly could lead to more challenging things in the future.

Thanks to Newsweek magazine, I was able to keep up with the crazy presidential election back home.

The Finnish were amused by it. “Only in America,” they would say. Hey, isn’t that Don King’s line?

The Finnish also went through a close presidential election last winter, only they were able to resolve it in quick order, which resulted in their first female president, Tarja Halonen.

As part of a clause in my contract, I will he home for 11 days during the holidays. I won’t be around to welcome the Finnish Santa Claus and his reindeer to town, an event that actually happens, but I need the break, as if you couldn’t tell.

Our team, Huima, has climbed to fourth place with a 9-7 record. The top four teams, out of nine, qualify for the playoffs. We have a long way to go to get there, with 14 more regular-season games on the schedule, and we have only a one-game lead over the fifth-place team.

We came up short in the Finnish Cup, earning a silver medal. Overall, I think the coaching staff is pleased with the team’s progress, the four-game winning streak in particular, and I know I can’t complain. I’m second in the league in scoring at 22.8 points and first in rebounding at 11.8.

I’m in the process of trying to find a new agent, which is not easy. Except for a few players, there is not a lot of money in women’s pro basketball. The average agent is going to invest only so many resources in a player like myself, and I understand that. Well, have a happy holiday season. I know I’m looking forward to it. U.S.A., here I come. Let there be sunlight.

Do You Have a Quick First Step? 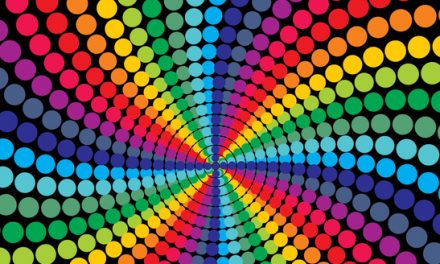